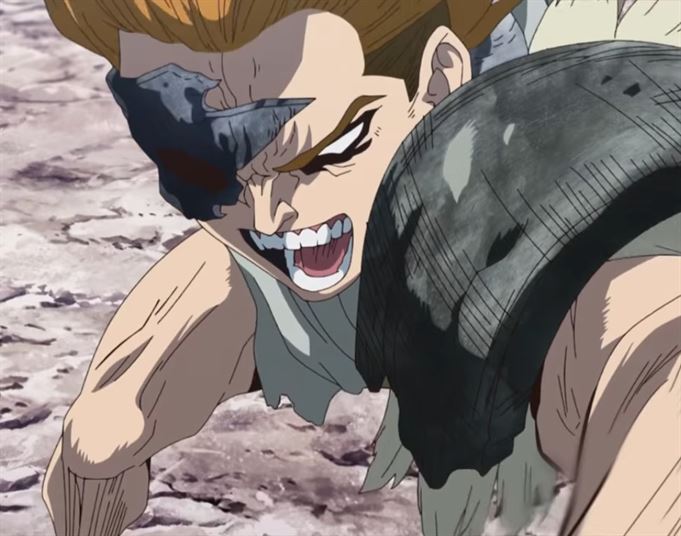 Chapter 229 played a pivotal role in telling us what turned humanity to stone 3700 years ago. He revealed that the Whyman is a massive compilation of mechanical parasites that rely on sentient species to replicate them and recharge their batteries. In addition, they consider petrification as the gift that grants everyone immortality.

The main reason for petrifaction was to speed up human evolution so that it could replicate jellyfish devices. Will Senku be able to negotiate with these Whyman in Dr. Stone Chapter 230?

It was also revealed that people with higher intelligence break free from petrification faster, which explains why Senku woke up before Taiju. In short, the “Why, Why” posts were Whyman’s curiosity about why humans don’t want to be petrified. It seems that Whyman misunderstood petrifaction as a gift to achieve immortality.

Whyman is looking to bargain, so they wanted to give humans immortality in exchange for keeping and replicating them. At least Whyman is playing fair but in the worst possible way.

In Dr. Stone Chapter 230, Senku will attempt to negotiate with the Mechanical Parasites. He must have been relieved to discover that Whyman is not the enemy of humanity. They are open for negotiation and are in desperate need of maintenance. Senku must make them understand that petrifaction is not a solution to mortality, but rather slows down their evolution.

At the moment, humanity is not capable of reproducing such advanced devices; however, you can recharge them by changing the batteries to Diamond. In exchange for this service, Senku could ask them to stop petrifying humans or at least delay this operation until they find a way to replicate the jellyfish devices.

We could also discover the origin of Whyman. Either he’s an alien AI gone haywire, or he’s the product of a human experiment gone terribly wrong. I wouldn’t be surprised if Whyman turns out to be the “Ultron” of the Dr. Stone universe. Raw scans and leaks of Dr. Stone Chapter 230 will be released 2-3 days before the official release. Don’t forget to come back to this page. We will keep this section updated.

Chapter 229 reveals that the Whyman is an AI mechanical parasite that cannot reproduce or replenish its batteries. However, he exhibits a survival instinct by multiplying and desperately tries to find a way to do it. His method is similar to that of any other biological parasite that involves relying on another organism to reproduce and obtain other resources. Whyman detected electromagnetic rays coming from the earth and petrified the swallows as proof.

The mystery behind the petrification ray has finally not been solved.

Whyman calls petrifaction the “gift of immortality,” implying that AI ​​has no idea of ​​the meaning of life. Immortality by petrifaction was supposed to be humanity’s gift to help these devices replicate. Little did she know that petrifaction prevents them from evolving. Also, the higher a person’s intelligence, the faster he is released from petrifaction.

So she also acts as a way to filter out the more amazing humans who want maintenance. The ultimate motive is to push humans to a technological point where they are advanced enough to replicate the Whymans.

Whyman detected the first electromagnetic waves from Treasure Island, about 3,000 years ago, after an accident. However, they were too weak for Whyman to take seriously. Later, Senku’s GPS produced an electromagnetic signal strong enough to attract Whyman’s attention. It turns out that “WILL YOU DIE” was not a threat but rather a question of curiosity about why humans reject immortality.

Dr. Stone Manga Chapter 230 release is scheduled for Sunday, February 20, 2022. The ongoing arc answers the question we have been asking ourselves since the beginning of the series, so don’t miss out on the release of new chapters every Sundays.

You can read Dr. Stone manga on Viz media and Shonen Jump official app. Newly released chapters can be read for free, but you must upgrade to a paid subscription to access the entire catalog. The manga is also available on various pirate sites, but I advise you to stick to the official channels.